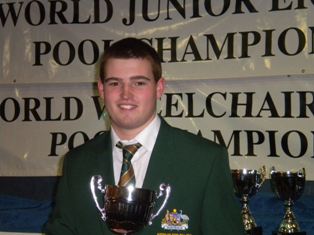 After a flying start  in Round 1 beating Lee Moran of the Channel Islands 6-0, Anthony then went on to whitewash  Ciaran Fay of  Ireland in the last

32 draw. With his second 6-0 win under his belt the young Australian player was drawn against another Channel Islander, Matt Barker. Unfortunately for Barker, Adams was again showing his superb form and the match finished with a 6-1 scoreline.

Still marching on, in the quarter final Anthony was drawn against the 2009 runner up Giuseppe D’Imperio who put up a gallant battle but eventually succumbed 7-4 to the Australian.

His opponent, an up and coming young star from England, Frank Costello, battled hard and eventually triumphed 8-4 to secure the crown and become the

Anthony’s team manager, Warren Ross said that Anthony played exceptionally well to reach the Junior World final. Much of the credit, he went on to say, of Anthony’s development into such a proficient pool player capable of playing at this level should go to his Junior Development Coach, Cyril Triffitt.

Young Adams should be very proud of his achievement in this prestigious event.

Anthony Adams will represent Australia in the 2010 World 8Ball Pool Championships to be played in Blackpool, England from June 27th June to July 8th 2010

You can check out the results on the World 8Ball web site for all the matches in Men's, Women's and Juniors

Anthony Adams was granted a spot in the last 24 for his selection to the Australian 8Ball Team for 2010, current by-laws read that any player that makes an original named Australian team from the previous Australian Championship to the current Tasmanian Open State Team Play-Off will be granted inclusion in to the last 24 for that year only

Eightball Tasmania wil be looking at changing this rule slightly to differ between Open and Junior Teams, with any player that makes the original Australian Open Team being granted inclusion in to the last 24 and the Juniors will only be if the player wins an Australian Junior Singles Title (Under 18 or Under 21 Title)

Based on current numbers the Northern qualifyers will have 16.5 players go through to the last 24 with 6.5 qualifyers from the Southern play-offs qualifying

Due to both areas having .5 of a player qualifyer for the last 24, the committee for this year only have decided that if the .5 situation is still present at the end of the Northen play-off on Sunday 27th June, there will be a play-off for the last position in the 24, with the Southern player travelling to the LWC on the Sunday to play the Northern player effected

In future years the committee will have in place a procedure has to what happens when the .5 situation arises

The 2010 State 8Ball Singles Title was played at the LWC on Saturday 1st May, with 24 players taking part from the South, North and North-West of the State

David Lee defeated Marcus Jackson to win the 2010 State 8Ball Calcutta and in process pocketed over $2,000.00 as David had brought himself earlier in the day in the player auction

A field of 25 players took part in the calcutta with 14 former / current State players taking part in the high quality field, we also had 3 women take part in this years event with 2 new players from the Deloraine 8Ball Association having a hit out for practice for the State women's team trials later in the year, along with Michelle Grundy from Hobart having a hit and performing well in the male dominated field

The Annual 2010 State 8Ball Calcutta will be held on Saturday April 10th at the LWC starting at 9.45am

*The draw is limited to 32 players and will be in the format of a double elimination, with the first Round being Best of 3 Frames

Entries for the event are taken on a first in basis, with paid entries taking preference over all entries