Under 18: 10th and 11th September at the Launceston Workers Club

All entries or further information is to go through Cyril Triffitt - 0407 870 306 or This email address is being protected from spambots. You need JavaScript enabled to view it.

The Tasmanian Team for the 2011 is now finalised with the Open, Women and Masters Events now all completed, the following players / teams will represent Tasmania at the Australian 8Ball National Titles in Sydney from October 16th - 28th

15 Women competed for the 2011 State Women's Team to play at the Australian 8Ball Titles in Campbelltown, NSW from October 17th - 28th

Played at the LWC on Saturday July 30th, the women played a full round robin 2 times with the top 7 making up the team

Click here to view results from round robin matches

The role of the team manager will be to assist Eightball Tasmania in the collection of monies, players uniforms, code of conducts signed and returned to Eightball Tasmania prior to the team leaving to compete at the Australian 8Ball Championships each year

Duties of the team manger while competing at Australian 8Ball Championships


Expressions of interest close on Friday July 15th with Eightball Tasmania
Eightball Tasmania
PO Box 275
Prospect, TAS 7250
or email to
This email address is being protected from spambots. You need JavaScript enabled to view it.

Wayne Elliott is the 2011 State Masters Champion, played at the Hobart Workers Club on Saturday July 9th, Elliott came through the 1st semi fianl and preliminary final to play Launceston based player Rodney Martin in the final

Eightball Tasmania would also like to thank the Hobart Workers Club, Tony Cannan (main organiser) and Phil Dando for their help in running this event

Justin Van Diepen made a great return to State 8ball qaulifying in the number 1 position with 32 wins and 14 loses, played at the Launceston Workers Club on July 16th and 17th the field of 24 players were competing for 9 positions to make up the team to compete at the Australian championships in Sydney in October, the weekend saw some new and old faces make the team and no doubt the team will have some hard work to put in before October to enable themselves the best chance of victory at the national championships. The final team is Anthony Adams (State Singles Winner), Justin Van Dipen, Marcus Jackson, Trent Brooks, Andrew Saltmarsh, Andrew Triffitt, Dallas Nichols, Chris Forsyth, Joel Smith, Cale Barrett

The final round for the 2011 State Open Team will be played at the LWC on June 16th and 17th, the final round has been moved forward by 2 weeks from our normal date of the last weeknd in July to enable the open team time to organise practice matches throughout the State as put forward by last years team captain (Jeremy McGuire), it will now be interesting if these practice sessions take place - lets hope so and try and unite a strong open team for an assult on the 2011 National title

To view the draw for the final round, click the link on the attachment below

The event is open to all member associations of Eightball Tasmania and only 5 players are required per team, with no limit on the amount of players in a team

We have the event down to be played over the June long-weekend June 11, 12 and 13 at the Launceston Workers Club (Please Note the Monday may not be used depending on the amount of teams entered, to be confirmed once teams are finalised)

Please view the flyer attached for more information or This email address is being protected from spambots. You need JavaScript enabled to view it.

The 2011 State 8Ball Singles Title was played at the LWC on Saturday 30th April, with 28 players taking part from the South, North and North-West of the State

Anthony Adams as last years runner up was seded 1 as Gregg Watt the 2010 Singles Champion did not compete this year event, followed by last years State side and then Andrew Triffitt, Andrew Holloway, Marcus Watt and Marc Bingham from the Northern Territory making up seeds 13 - 16

Videos of the Final and Pictures are on our Facebook page - http://www.facebook.com/8BallTas 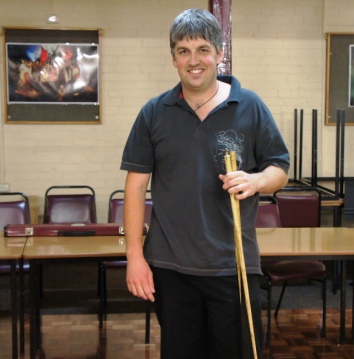 Congratulations to David Lee on winning the 2011 State Calcutta by defeating his brother Ricky Lee in the final 5-4, special mention to Ricky who beat current World 8Ball Champion Michael Hill from the UK, who is currently touring the State with some exhibition shows, Ricky defeated Mick twice in the double elimination format, a great effort

In all 27 people played in the event which was our highest number of entries in recent years and those present were treated to some high quality games, not only by Mick Hill but also the Lee boys (Some video footage will be uploaded to the Eightball Tasmania Facebook page) - http://www.facebook.com/8BallTas 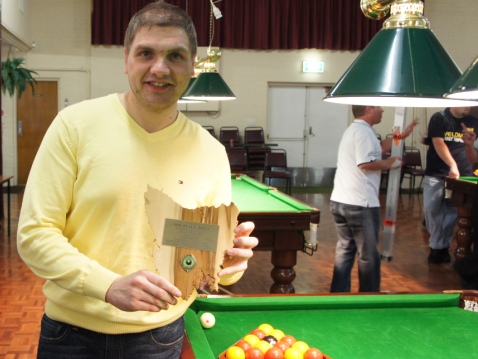 Next Event: 2011 State Open Singles - Saturday April 30th at the LWC starting at 9.30am - Enter this Event Online

Original Information for the Event

Note: Eightball Tasmanian and the Tasmanian Snooker body have been working together for many years is setting a State Calender that enable players to play in both disciplines if they wish